As some of you might know, I happen to be a reasonably dab hand with a bit of the old “francais” (that’s French for French, and to anyone who would call me out about the lack of cedilla accent, I cannot be bothered opening my character map!).

Because of my foreign language knowledge, I decided earlier in the yet that it would be a good ploy on my part to build an affiliate website in French and see what happens. Here’s a quick case study to let you know where I’m at with it:

Ever since Clickbank added support for foreign language products I had longingly browsed the French section, hoping one day to actually get off my ass and start raking in the coin. As far as product selection goes, there are actually loads of different options on Clickbank in a whole raft of different niches. Many English product owners (especially in the diet/fitness and relationship help niches) have basically ported their products over with a quick-n-easy translation job to cash in on French, German, Spanish and other such linguistically diverse affiliates.

Right off the bat, the competition is much lower in these “evergreen” niches than it is in English. Using the ever-reliable (and free) Traffic Travis to do keyword research, there are plenty of phrases in French for dating, weight loss, make money online etc. that have huge traffic volume and for which I could probably rank. However, my French isn’t quite at the level where I could work quickly enough to do the requisite link building to hit page one myself. So what I decided to look for was a smaller niche; one that still had demand but a lot less competition.

In the end I settled on the “stop sweating” niche. Not the most glamorous idea I’ll admit, but there was an okay looking product on Clickbank, plus keywords with several thousand searches per month in French. I even managed to nab myself an exact-match domain (www.jetranspirebeaucoup.info) for a few bucks.

To create the site I used Mark Ling’s AffiloTheme (same as for this blog). It was a very quick and painless process and I had the empty shell of the website configured in under a couple of hours.

As far as content goes, I decided against writing the articles myself. I had a list of 10 keywords I wanted to start with, and realistically it was going to take me at least 3-4 hours per article to write. Why? Because I write slower in French and would need more time to actually proof and tweak my content.

Here’s where I made my first BIG mistake – I paid a cut-rate writer on iWriter to create the first few articles for the site. Now iWriter articles are generally not too bad quality, especially if you buy the premium ones, but the guy I hired to do the French ones totally, 100%, unequivocally SUCKED. My French was better than his, but I don’t like making someone work and not give them any reward, so I paid up.

I slapped those first articles on my site, added some affiliate links + banners, and then left it.

That’s a joke. I didn’t do any SEO or promotion. Well apart from hiring someone to submit my site to a bunch of French directories (which does appear to have generated me a handsome number of backlinks when I check the stats).

However, compared with the normal efforts I put into marketing websites I did absolutely nothing really. I just left the site for a few months, and eventually the traffic flowed in as I crept onto page one of Google France for a number of keywords. After a while I was getting upwards of 50-100 visitors a day, but still no sales.

About 6 weeks ago I decided I wanted to try and make something of this site. I was getting traffic and clicks, but no sales. I decided to head over to Elance and hire a French copywriter/writing pro to do a few things. Firstly, I wanted the old articles tweaked as I knew the grammar and spelling sucked. Secondly, I wanted another bunch of content added. Thirdly, I wanted an email newsletter sequence and opt-in hooks created. Finally, I wanted a kickass product review written in a personalized manner.

After a week’s trialing I hired a guy who costed the whole project at around $474 USD. That was about a third more than the next lowest offer, but he had the best communication and credentials.

We worked together for about a fortnight, got all the stuff put together, and then I paid him. The guy was great to work with and followed my instructions precisely.

Now comes the fun part… how much did it all cost?

* $50 for the first 5 articles through iWriter

* $20 for the directory submits

* Nothing else – No seriously, I’ve had over 600 targeted hops, 75+ order form impressions, and not a single submit (and bear in mind I’ve had a trained French copywriter set up the promotion funnel for me). After 3000 visits I hadn’t even had a single opt-in, whereas I would normally expect at least 100 leads from that kind of traffic volume at the very worst.

Why I think the site has “failed” so far

There are a few reasons why I think my site hasn’t actually made me any affiliate commissions, and only chump change from Amazon. Let’s revisit the profit formula for Internet/affiliate marketing that forms the basis of any profitable campaign:

Okay, that’s a simplistic way of looking at, but fundamentally that formula applies satisfactorily.

Breaking it down I can see that I have traffic; the site is doing 100+ unique visitors a day, and the bounce rate isn’t super terrible or anything:

And just so you know I’m not full of it, here’s a screenshot of the all-time traffic stats: 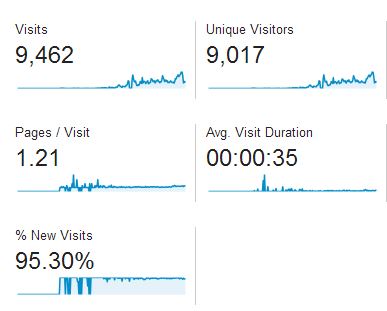 So the traffic’s there. I haven’t made any sales (so the refunds aren’t a consideration). What that means is that there is a problem with the conversions; using a profit formula basically gives you the opportunity to run a diagnostic check on why your website isn’t making any sales.

Seeing as I hired a very clued-up guy for the sales copy, I don’t think there is any issue with the pre-sell – it seemed to turn visits into sales page/order form impressions easily. Where I truly think this campaign has let itself down is the affiliate eBook I’m selling. It’s just too expensive at 30-something Euros, considering it’s a short eBook. Furthermore, the sales copy on the affiliate page itself is a bit sucky too.

Another factor I didn’t consider is the “cultural” side of selling affiliate products to the French audience. This is hard to explain, but have you ever seen someone whose first language isn’t English try to pitch a product? Unless they have attained a SUPER high level of fluency, they will probably use turns of phrase that don’t quite work for a native speaker, and which could put you off purchasing. Furthermore, different cultures and languages have different approaches to buying and selling, appraising the value of goods and so on (one of the things I loved when I visited the Middle East was how much people haggle over stuff. It rarely happens here in NZ, except for the biggest ticket purchases).

The moral of the story?

I guess one of the morals to this story is that I should have listened to my intuition more. I should have kept the “crappy” articles up there with some banner ads and hoped for the occasional sale; even if the site only made a sale every three or four months it’s not exactly costing me anything to have it up there. The $500 I invested into improving the site I should have put into outsourcing a quality Kindle eBook and using that to build leads. Or I could have just spent the $500 on some new clothes, dog food, or invested it in gold or something.

My intuition told me that this site was a dead duck, but I didn’t listen to that naggling inner voice… and I paid the price for it!

The only silver lining? I can sound very cultured saying that I own a French website… and I don’t sweat so more in the gym.