I remember when I first started affiliate marketing that Hubpages was one of the hottest places to go to make easy cash. You could rock on up and register an account, then churn out hubs targeted to competitive long-tail keyword phrases. You would then lace those hubs with Clickbank links (as well as Amazon and other forms of affiliate advertising) and the cash would just roll on in.

And then it all came crashing down, because Hubpages decided that they would no longer allow the use of Clickbank links and closed down any hubs that were deemed to be overly-promotional. In fact, Hubpages became rather arbitrary with shutting down hubs – if it looked like you were trying to profit in any way, shape, or form (other than from their meager revenue sharing facility, which I will cover later) then you were liable to have your hubs shut down with no notice, and your account banned.

Everything came to a head for Hubpages at the start of 2011, when Google rolled out its now infamous “Panda” update. According to this sweet article I found about how Google’s Panda update affected both Hubpages and Squidoo, the first Panda update halved Hubpage’s traffic. That’s pretty unfortunate if you ask me.

Here’s a wee chart that demonstrates Hubpages’ fall from grace: 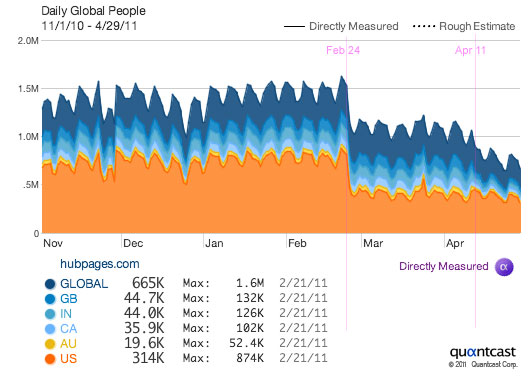 So what was the response from Hubpages?

The move towards subdomains does appear to have regained some traffic for Hubpages (do a quick Google search and you’ll see plenty of evidence). I’m going to assume that this is because quality subdomains are treated separately by the search engines – where there is low-quality content it does not drag down the entire site.

The second response from Hubpages was to become even stricter in terms of quality guidelines. Many topics have been banned altogether, including “spam-prone” subjects like weight loss, Internet marketing, and green energy. However, you can get hubs published on this topic if you contribute something of truly stellar quality (not that anything you contribute to Hubpages will be viewed by the editors as good enough, unless you are in the privileged upper echelons of the Hubpages member-base)

Even linking to external sites that feature Clickbank or Amazon ads, Adsense, or squeeze pages/opt-in forms runs the risk of getting your hubs penalized and banned by the overzealous editing team.

Is Hubpages A Waste Of time?

Although I hate to admit it, primarily because I put a lot of effort into creating some truly useful hubs during its heyday, Hubpages is a waste of time for Internet/affiliate marketers.

Here’s why I think Hubpages isn’t worth your effort anymore:

The way I see it, Hubpages is really only suited to those who are happy writing quality content in the hope that they will get some ad clicks and make a bit of revenue. I’ve seen members on the Hubpages forum jumping for joy when they start earning $5 per day – and then you discover that they have created dozens of high-quality hubs just to earn that paltry sum. If these writers spent that time creating their own blogs and properly monetizing them, then they could easily make far more money!

If you don’t have the confidence to build your own website or blog, or you just like writing for writing’s sake and any passive income you earn as a consequence is a bonus extra, then you will be right at home on Hubpages. But if writing is all you want to do, then why not head over to Constant Content and just write simple 400-500 word articles and sell them for $20 (which is a great selling price point in my experience).

If you could write 2 articles per hour, which isn’t too difficult once you get a rhythm going, then you could feasibly make $25-30 per hour (after CC take their cut).

In conclusion, the over-zealous moderation team, the boot-licking members who never stop to question whether all the effort they are putting in is actually worth the reward, and the lack of viable self-promotion avenues make Hubpages a difficult choice to recommend in 2012 and beyond.

But don’t shoot me, I’m just the messenger!

Make sure you sign up for your free Super Affiliate Secrets report below, and learn how to start making REAL money online: